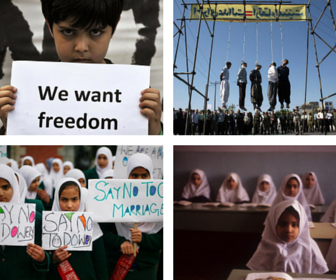 Do Not Let the Iranian Government Get Away with Murder!

Never! Never should Iran be allowed to have a nuclear weapon! This mantra has foolishly been replaced with a deal that released over $150 billion in sanctions relief that the Mullahs now use to fund murder abroad and murder at home, while more and more centrifuges spin faster and faster to produce weapons-grade uranium for nuclear bombs, and ICBMs to deliver them.

Not since Neville Chamberlain’s betrayal of Czechoslovakia, and his naïve speech promising “Peace in our Time”, has a leader of the free world done something so utterly outrageous and clearly dangerous. Rather than preventing Iran from developing weapons of mass destruction, Obama's deal allowed Iran’s to build up weapons and committed the United States to protect Iran while they are doing so. President Donald Trump reinstated and strengthened sanctions against Iran. However, Iran funds Hamas in Gaza, Hezbollah and Lebanon, Al Shabab in Somalia, Assad in Syria and countless other terrorist groups around the world.

Today, Canada is one of the only countries in the free world that promises to uphold economic sanctions against Iran. Canada recognizes that a country that cynically persecutes and murders its own citizens cannot be trusted to uphold any of its foreign military agreements. Canada must stand firm!

It is well known that most citizens in Iran hate their government. Iran is following the outrageous examples set by Nazi Germany and Soviet Russia in the 20th century, and North Korea and Syria today. These regimes which are the least democratic and the most hostile to their neighbours also inevitably trample the human rights of their own citizens. Iran is killing and torturing hundreds of its own citizens, including some who return for a visit, such as Canadian-Iranian journalist Zahra Kazemi.