Is there a terrorist out there that Justin Trudeau doesn’t like?

Justin Trudeau’s family vacation to India turned from a national embarrassment to an international incident whenJaspal Atwal, a former member of the International Sikh Youth Federation, a banned terrorist group in Canada, the U.K., the U.S., and India, was invited to dine with Prime Minister Justin Trudeau at a formal event hosted by the Canadian High Commissioner on Thursday in Delhi.

Atwal was convicted, in a Canadian court, of the attempted murder of Indian cabinet minister, Malkiat Singh Sidhu, on Vancouver Island in 1986 and was also charged, but not convicted, for a 1985 near-fatal attack on Ujjal Dosanjh who later became premier of British Columbia.

In one move, Justin Trudeau has managed to sour our relationship with India, embarrass Canada, support terrorism and undermine our legal system. Enough is enough. Trudeau’s rule gets more dangerous every day he is in office.

The mistake was so egregious that even the CBC had to cover it: See it here

In case the Prime Minister tries to deny his association to Jasper Atwal, here are pictures of the two together when Trudeau was an MP and when he was party leader:

On February 10th, Iran committed an act of war against Israel by sending a military drone into Israeli airspace.  The world was silent, except for the parts of the Western media that labeled Israel the aggressor.

One would expect that when a country (Iran) threatens another (Israel) with nuclear destruction and then violates its airspace, that that would spark international condemnation.  Yet, when the Jewish state is involved, it works differently.  Somehow the Western world is unwilling to come to terms with the idea that the Jewish state has a right to self-defense.

Melanie Phillips made an important point in a recent article when she wrote:

“There will be a far greater chance of averting all-out war if Britain and Europe finally come to their senses and start holding Iran’s feet to the fire rather than seeking to sanitise, excuse and reward it at every opportunity.”

Join us this Sunday, February 18th at Holy Blossom Temple when Melanie Phillips will address the current issues facing Israel and the rest of the Western world.

STILL A LOT TO LEARN – How Professor Salim Mansur is trying to clarify Muslim teachings, by Robert Fulford (National Post)

In the 21st century, anyone who chooses to be a “dissident Muslim” must deal with serious loneliness. Non-Muslims imagine that all Muslims are more or less the same. Muslims usually regard their faith as obvious and true, so who could dissent from it?

Salim Mansur, a political science professor at Western University in London, Ont., is a dissident Muslim. He defines himself against the Islamists who support Islamic militancy and fundamentalism. Islamists believe they are duty bound to achieve, by persuasion or force, God’s law in an Islamic-directed world.

“I am one of those Muslims who is at home in the West,” Mansur writes. He was born to an Indian Muslim family and received much of his education in the West, including his Ph.D. at the University of Toronto. He believes he’s deeply aware of the culture and politics on both sides of the West/Islam divide.

Mansur’sThe Qur’an Problem and Islamism: Reflections of a Dissident Muslim (Mantua Books), is an attempt to clarify the Islamist teachings that have placed Muslims at the center of a long-running international crisis.

He dates this tragic period from 1989, the year Ayatollah Khomeini pronounced a fatwa of death on Salman Rushdie for his allegedly blasphemous novel, The Satanic Verses. The Union of Islamic Students’ Associations in Europe infamously offered its services to help Khomeini. A London property developer told reporters at the time, “If I see him, I will kill him straight away. Take my name and address. One day I will kill him.”

Since the fatwa, Mansur says, “a significant segment of the Muslim world has been ideologically mobilized” against the West and its governing principles.

In recent years many in the West have felt self- conscious when talking about Islam. The hideous word “Islamophobia” has been invented to frighten away those who question Islam, even if their concerns are entirely legitimate. Mansur, on the contrary, tells us that the world of Islam needs criticism.

In Mansur’s view, Islamist regimes have distorted the Qur’an to provide an aura of authority and legitimacy. With the holy law on their side, terrorist organizations like Al Qaeda and ISIS have made their ideas appear relevant to the Muslim world.

Many in the West, including even some Muslims, think that they can discuss Islam and its needs on the basis of a few words fished at random out of the Qur’an. Barack Obama took an excerpt literally when he spoke of Islam as a religion of peace. That proved, he said, that the so-called Islamic State could not be Islamic. But Mansur’s book shows that over the centuries Islam has believed many ideas, not all of them consistent with others.

In careful, clear prose, Mansur takes us through the tangle of theories and inner conflicts that have shaped Islam, in which Islamists have played a large plot. It’s a pathology that encourages conflict with others who can be seen as enemies, such as Jews. This compulsion has “turned into Muslim- on- Muslim violence, a raging sectarian conflict of Sunnis against Shi’ites and ethnic conflicts of tribes against tribes or nations against nations.” Many of these have come accompanied by new or altered doctrine.

At the end of the 20th century, most of us viewed Muslims as adherents of an outdated but harmless religion, limited to one region and one cultural group, the Arabs. Since the eruptions that followed 2001 we have been learning how wrong we were. Mansur’s cool, intelligent overview of his own faith tells us we still have a lot to learn.

The Qur'an Problem and Islamism 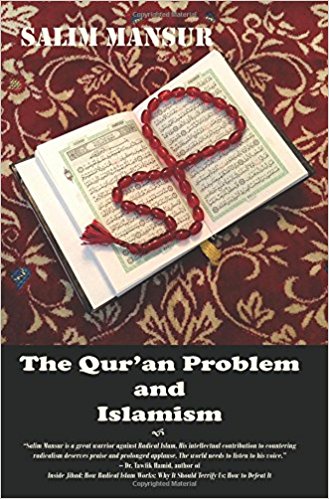 Salim Mansur, a Professor of Political Sciences, and a self-described “dissident Muslim” is one of the most prolific and steadfast defenders of Western civilization.

In his new book, The Qur’an Problem and Islamism, Professor Mansur who is also a Fellow of Mozuud, deals a heavy blow to Islamists.

In the National Post, Robert Fulford points out that this book takes an honest look at the political mobilization of Islam against the West, the incompatibility of Sharia Law with Canadian values and freedoms, and the modern anti-Semitism that is all too prevalent in the Arab and Muslim world.

If you are looking for a reasonable, detailed and authentic counter-argument to the multi-cultural approach to Islamism (that promotes all cultures as being equal), this book is for you!

The danger of political Islam in Canada 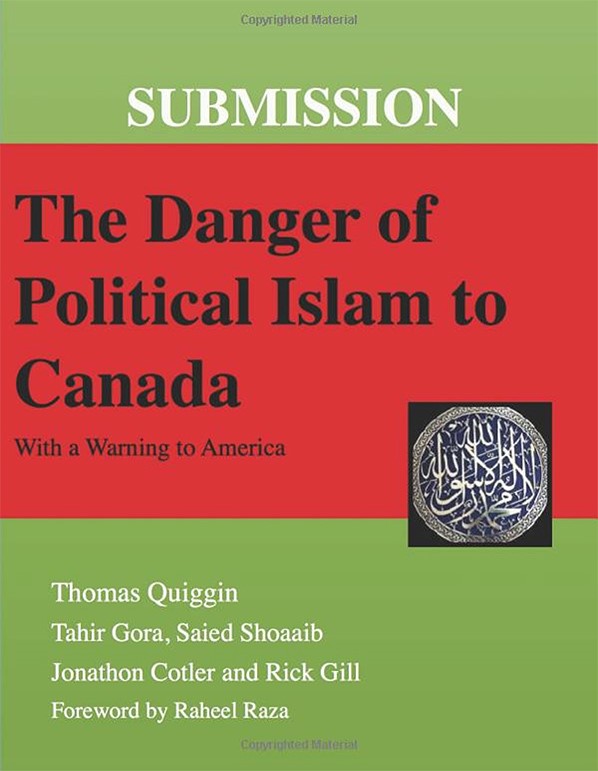 Tom Quiggin’s new book, SUBMISSION: The Danger of Political Islam to Canada, is a must-read for all Canadians concerned with our government’s approach to Islamization. In it, he and his co-authors detail the frightening pervasiveness of political Islamist groups in Canada and Justin Trudeau's near-perfect record of support for them.

Considering Muslim Brotherhood affiliates are already being consulted on federal and provincial policy as well as our educational curriculums, the time for action is now! Here in this interview with TagTV Tom Quiggin and Tahir Gora discuss the growing threats from Islamization and the politicians willfully blind to it.

The interview is 30 minutes long, but if you only have time for 5-10 minutes there is a lot of valuable information at the beginning that can help educate you on the state of Canadian politics on Islamism.

For a detailed and informative look at how your tax dollars are being used to support the Islamist cause, here is Tom Quiggin's most recent article on the CBC: https://www.gatestoneinstitute.org/11849/canada-cbc-islamists.